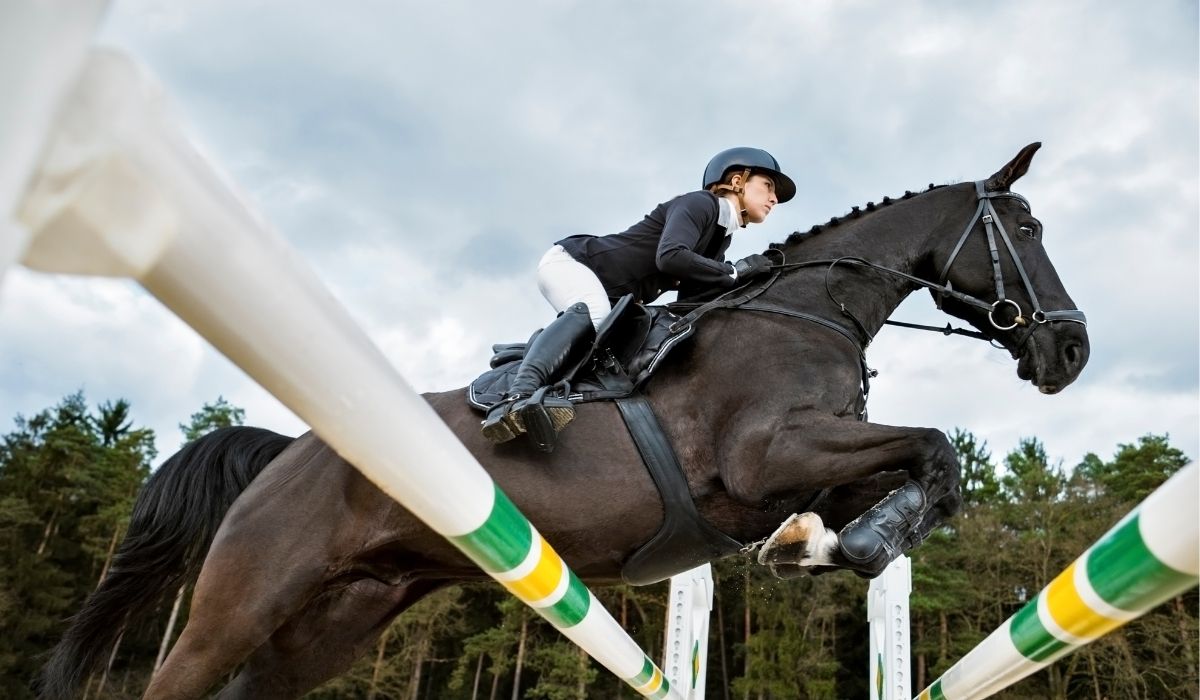 There are many different types of jumps at equestrian events that may inspire questions regarding the complexity of the sport, like what is an oxer jump? A usual jumping championship will have many obstacle courses with varying degrees of difficulty.

Whether knowing the ins and outs that happen at these events, either as a competitor or spectator, it’s quite a marvelous show. With the many rules and regulations comes a certain appreciation for the grace and sportsmanship of both horses and riders.

There are many different types of horse jumps, depending on what discipline is implemented. Competitions will vary based on what kinds of jumps will be in use or on how the course is designed.

Showjumping is the most recognizable form of discipline in which obstacle courses are adorned with brightly colored fences. There are distinctive types of fences with alternating difficulty levels, where the jumping pole is higher or lower.

This will make some jumps scarier than others, with the added bonus of them being painted and decorated. Every year, new ideas are put into practice with jumping poles to make them even more visually creative and difficult.

With its own particular kinds of fences, eventing still takes elements from showjumping but with a twist. Fences for this are built to be solid, and this adds a new level of perceived danger to the horses. Not only that, but fences have different shapes or colors, to really test a horse’s bravery.

This is where showjumping mixes with eventing for a real challenge. Typically this style uses a more common form of fences from the showjumping style with foliage decorations. They would look like something a horse would see on a hunting field, but combined with varying degrees of difficulty like in eventing. 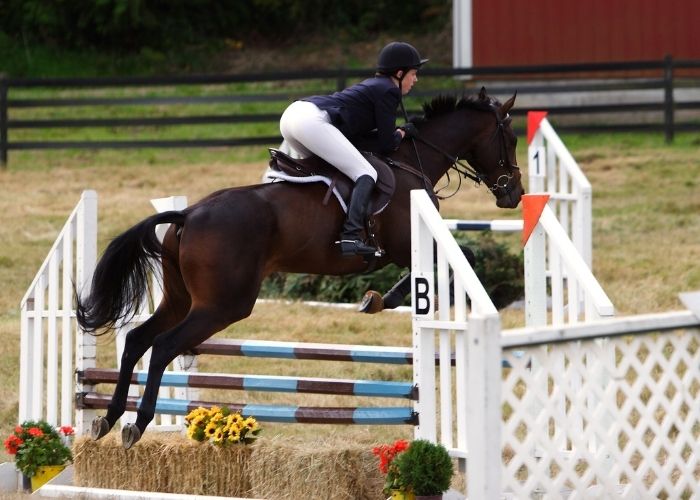 Style of discipline aside, specific jumps come with specific names and techniques attached to them. One may ask what are the different types of horse jumping, and find a slew of different jumps. Some are more advanced than others, and they pose a diverse range of challenges for rider and horse.

With verticals, horses must jump over a number of poles placed one under another. There could be a series of vertical jumps, one higher than another, with more or fewer poles stacked on top of one another. This jump has no spread, and the fence appears solid to the horse and might spook it.

Thinking about what is an oxer jump we are introduced to the double vertical fence with a space in the middle. The two fences facing each other are at the same height or can be at different heights for more difficult jumps. This can be a hard jump, so training is needed, to accommodate the horse with the widespread.

Sometimes when referring to an oxer, the spread comes into the conversation. But what is the difference between an oxer and a spread? The two names simply denote the same jump.

Having to pull off this jump one must question how wide an oxer is? The width of an oxer jump will depend on the difficulty level. Lower level spreads will be 1.9 to 2.9 feet wide, while more advanced jumps can be as wide as 4 feet.

A cross rail jump is made up of two poles arranged in a cross or X shape. This is usually not a jump included in the competition as it is more a training jump, specifically for beginners. This kind of jump helps the horse aim for the center of the fence. The cross shapes create a sense of a narrow jump.

A wall jump is an ordinary vertical jump, but it’s made to look showier due to the fence’s design. Made to look like an intimidating brick wall, it is actually built with lightweight foam. This is done so that the horse won’t get injured if it strikes it. The idea with a jump like this is to compete in courage points as many horses may refuse to jump.

Veering further away from questions like what is an oxer jump, brings in other unusual jumps like the Hogsback jump. This is an advanced-level jump for more experienced riders. A series of uneven poles are included with this obstacle, and they are arranged in sets of three.

In the center, we find the highest pole, with two other poles at different heights at the beginning and end. Aptly names a Hogsback jump for the uneven jump sets it encompasses.

A triple bar jump is a more demanding jump found in horse shows. It consists of three poles arranged in an ascending sequence. This jump really challenges the horse’s ability to perform at higher levels of difficulty.

Read more about Can A Horse With Navicular Jump?

Conclusions – What Is An Oxer Jump

From questions like hat is an oxer jump to what is an equestrian jump off, equestrian shows and competitions are quite complex. The different types of jumps with their various levels of difficulty can still bring competitors to a tie. This is where the equestrian jump-off comes into play to break the tie.

What are the different types of horse jumping?

Show horse competitions encompass a great many different types of jumps. Some are more complicated than others, each jump is designed to provide a challenge for the horse and rider in turn. Some of the most common types of horse jumps include the oxer, cross rail, wall jump, triple bar jump, and even Hogsback jump.

What is an equestrian jump off?

Sometimes show horse competitors find themselves at a tie and as such must have a tie-breaking competition to settle the matter with an equestrian jump off. This usually includes a rather difficult set of jumps that are timed and the one that finishes faster wins.

What is the difference between an oxer and a spread?

An oxer and a spread are sometimes misconstrued to be two different types of jumps, but in fact, they are one and the same. There are simply two names to denote the same kind of jump.

How wide is an oxer?

Read more about Best Jumping Exercises For Horses That Rush